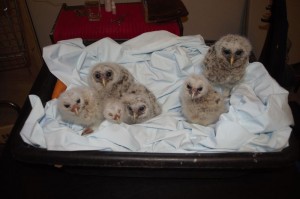 Hacking is an old falconry technique that is literally, thousands of years old. Hacking orphaned hawks and owls (AKA soft release) is also how we re-introduced the Golden Eagle back to the Cumberland Plateau in northwest Georgia, the American Bald eagle to the Lake Allatoona area north of Atlanta and the Peregrine Falcon in downtown Atlanta.

These little guys are displaced Northern Barred owls, which are native to the southeast (Florida Barreds are…in Florida, but there isn’t a dime’s worth of difference between the two). Anyway, these birds are cavity nesters and so they either get blown over in spring storms or someone cuts their house out from under them, not realizing there are babes in the tree.

Some rehabbers (probably MOST) don’t bother with this hacking orphaned hawks and owl business because it takes MONTHS and lots of MICE. Most will just grow them to a certain size, toss some live mice into their chamber and once the youngsters kill said live mice, the birds will be taken out somewhere and deposited and hope for the best. (the ‘out of sight, out of mind technique,’ I call it). I would hazard a guess that very few of these birds survive for very long because they don’t have their parents there to support them nutritionally while teaching them life skills.

Some rehabbers even have foster birds to help raise them so they don’t imprint on humans, but that doesn’t help much once the babe is released..again, no support and no life skills are forthcoming.

Enter – HACKING – Puppet fed so the babes cannot see or hear you, thus  preventing them from mal-imprinting. When you approach with food and you can either use a clicker, whistle or a certain sound with your voice (no baby talking!) and this sets up the Pavlov’s Dog thing. They hear the sound and know the food is coming, so when the youngsters are released a couple months later, you can call them down to the hack board for food. This is really important to their survival because since they don’t have their parents to teach them life skills or offer nutritional support, you will be providing food to them while they figure out things on their own. It’s simple, really, and I just wish more rehabbers used this method.

This fancy construct is what keeps the young from seeing you. 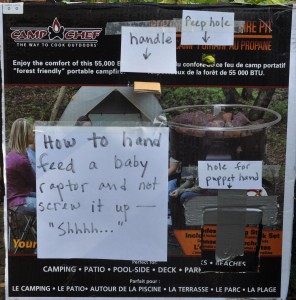 The same babes that were in the first photo…growing like weeds!

Door’s open – food’s on the hack board. Freedom awaits! 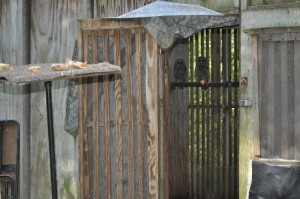 Barred owls prey on aquatic vertebrates, so I get them down to the hack board at the pond. It doesn’t take them long to figure things out! 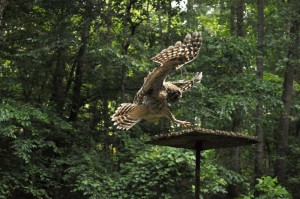 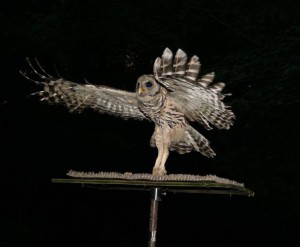 As the babes get older, their visits to the hack board will slow down because they have learned to catch their own food. some disperse within a few weeks, some stay as late as October, so you can see why we need Mouse Money!