About Monteen Mccord and HawkTalk 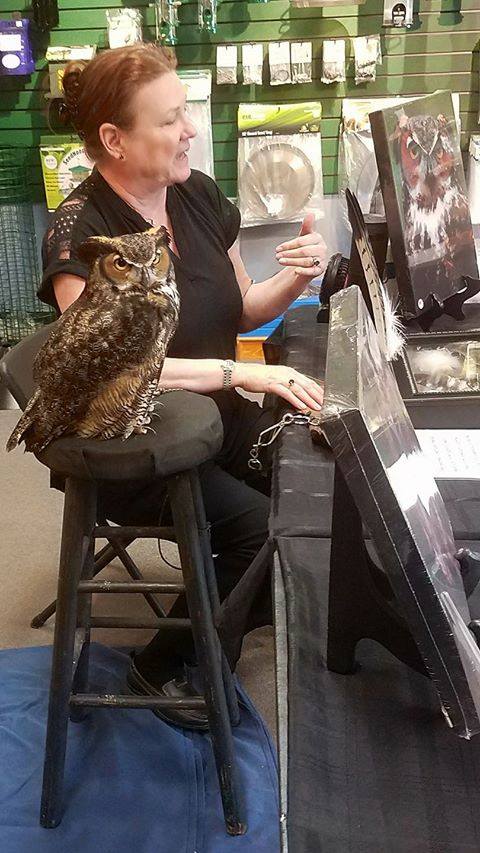 My background in the early 80’s was as a surgical nurse in human medicine, but it didn’t take long to realize that my calling was for animals. Transferring surgical skills to the veterinary field, the first vet to employ me had Special Purpose State and Federal Migratory bird rehabilitation permits.  Meeting nose to beak, that beautiful Great horned owl with the moon pie eyes, well, it changed my life.

As far as the employed masses go, I was one of the lucky ones that knew right then and there what I was put on this earth to do. My goodness me, of all the people I know in miserable, six-figure corporate jobs that spend another part time job on the highways and byways getting to and from, or government workers ‘doing time’ in State, Federal or County jobs, just holding on for dear life until they can get their pension to escape and start living again. I know of very few people that are really happy about their job and where they are in life.

Unfortunately, not enough people do what they love doing… And why is that? Because usually, what you love doing doesn’t pay very well. Enter raptor (wildlife) rehabilitation. If you need to be surrounded by ‘stuff’, a new car every year, if you are a ‘high maintenance’ babe or you have a family with kids and grand kids pulling you in ten different directions, this isn’t the life for you.

Steve and I never had children and have been divorced for 23 years and you know the funny thing, he STILL donates to HawkTalk. He said to me a few years ago that I have remained true to myself and my calling. It really choked me up to hear him say that. Now don’t get me wrong, I don’t ENJOY living below the poverty level and I wouldn’t mind changing that, but I have an uncanny ability to somehow survive the ebb and flow of running a teeny-tiny non profit.

HawkTalk incorporated in 1993 and achieved 501(c)3 non-profit status in the year 2000. Boy, was I ever naive…I thought, OK we’re non-profit now, we’ll get us some grants! NOPE, it doesn’t work that way. Let me say there are trade-offs to everything and  after consulting with a handful of high profile Directors of public facilities, the decision was made not to go public. They all said that when you ‘go public’ your role then becomes one of organizer, fund raiser and glad-hander, constantly running here and there, trying to keep everyone happy while at the same time raising funds to feed the beast you have just created. In other words, I will never again rehab another bird, nor teach another class. OH, I said. OK, forget that.

The trade-offs are too many to count, good and bad, but basically…

The bad? – Not having the ability to secure high dollar grants or pull in six figures in one night with a black tie silent auction. Having event planners that don’t want to waste their time on your small non-profit.

The good? Being my own boss. Coming and going as I please. Doing my own thing helping one bird at the time. Having more down time to enjoy life,  the birds, cats, plants, yard and pond… Apparently, it doesn’t take a lot to make me happy and that’s a good thing!

And like the little kid tossing the stranded starfish back into the ocean one at a time, wildlife rehabilitators don’t affect the population dynamics as a whole; we just help one injured or orphaned animal at the time…and earn spiritual brownie points along the way.

Yes, I do get discouraged at times.  But each and every time I release a beautifuil, magnificent bird of prey back into the wild and realize right then and there that, were it not for what I do, that bird would not have survived…well…there you have it.

If you are a contributor to HawkTalk, I am forever grateful for you. If you are not, I hope you will consider becoming one.  It takes lots of rats and mice to feed these birds and rats and mice are expensive.  No matter how small your contribution may be, it is a BIG help…and I sincerely thank you!

PS. Just click on this link to make a donation now. (Yes, it is tax deductible)