Birds of Prey – Barred owls in the hacking process 061916

First off, a shout out to Hal Coleman http://www.halcoleman.com for walking me through how to embed video here on WordPress. It’s been a coon’s age since I’ve done this.

I used to be able to embed video, but something changed and I couldn’t figure it out.

Anyways, here I am again and I’m happy as a clam.

Our 2016 hacking season has begun in earnest. We were able to physically re-nest about 10 youngsters, but ended up with a total of 10 orphaned Barred owls and 4 Screech owls. It’s all but impossible to film the Screechies coming down to the hack board because I have to go up at about 5am while it’s still dark to call them in and place food on their hack board.

I start the operant conditioning immediately upon their arrival. I’ll make some sort of consistent sound (trilling for Screeches) when I’m bringing food and until they are past the imprinting stage, I use a cardboard shield and cover my hand with a puppet so they don’t start to associate me (the human) with food. Here is a clip of them responding to my ‘trill’. It’s not rocket science, but it’s important…

When they start to self feed, I move them out of the bird room into their chamber.

I have a portable hack board already in place inside the chamber so that will become their focal point for food during captivity AND post-release.

When I start up the hill to feed them, I start ‘trilling’ to them, which tells them I’m here with food, then when I place the food on the hack board, I ring the bell, which reinforces in their little brains, “Hey, she’s here with food!” 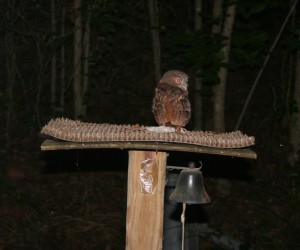 In years past, I would hack the young Barreds out in the lower chamber, but my

Eagle owl lives there now, so I had to hack them out of one of the upper chambers, which put them further away from the pond, their eventual source for practicing becoming owls. When I opened the door on the Barred owl babes, instead of heading towards the pond, they went back into the woods, so it took me about a week to get them down where they needed to be. Boy, was I stressed. It is now my fervent wish to build a hacking cage right down here at the pond, so we don’t run into this issue ever again.

The day of their release –

They were VERY spooky at first, wild as snakes, but fortunately for me, have eased

up a bit and will allow me up close opportunities for filming and photographing. 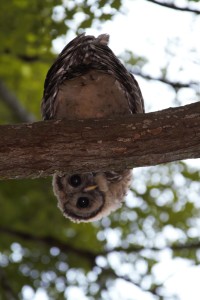 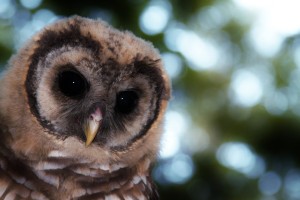 This clip is the most recent entry on our YouTube channel

We’re currently feeding 19 birds here at HawkTalk HQ – 14 of those are being hacked out and BOY, do they eat a lot of food. They burn a lot more calories once they are released and I have to make sure their tummies are good and full during the day, so they can explore and practice at night without the desperation of hunger.

Most rehabbers don’t use this hacking technique either because they don’t know about it, or they don’t want to spend the time and resources. It takes all summer and a LOT of food before they gain proper feeding skills and begin to disperse on to their wild thing called life.

If you can help us with a donation, we sure would be grateful. PayPal makes it very convenient if you would like to make a one-time donation, or set up a monthly contribution of ‘Mouse Money’. You can click on the ‘donate’ button here on our site, and on our facebook site if you’ve ‘liked’ us over there http://facebook.com/hawktalk.org

We are a 501(c)3 not for profit organization and all contributions are tax deductible.

If you are hinky about sending money electronically, you can always snail mail us a contribution:

Thank you for taking the time to read my blog!